A memorable event was held on 25/02/2018 at Buchi Congregation in Kitwe when Rev. Dr Jonathan Kangwa was being inducted to serve as registrar for the United Church of Zambia (UCZ) University.

The UCZ General Secretary Rev. Dr Peggy Mulambya-Kabonde welcomed and applauded the Guest of honour, Foreign Affairs Minister Hon. Joseph Malanji who was accompanied by his wife for being able to grace the occasion despite his busy schedule thereby attaching value to things of God. 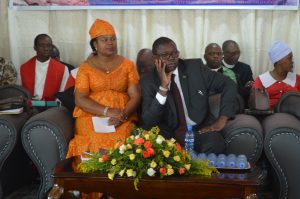 Rev. Dr Kabonde acclaimed how UCZ has partnered with government from time immemorial in the provision of social services to the people of Zambia citing the area of Education as an example where the church runs Primary and Secondary Schools in almost all the provinces in the country as well as Skills Centres in Central, Southern and Western provinces. “The performance of the schools has been very impressive going by the Quality of Examination results at both grade nine and grade twelve” she added.

She also gave a brief background of the UCZ University by mentioning how it was predominantly a centre of theological training but now has evolved into a fully-fledged University that includes additional schools offering opportunities for members of the public to train in other disciplines.

In the same vein, she took advantage of the occasion to inform the church members and government that UCZ University intends to re-open the Nursing School at Mbereshi but hasn’t been able to do so due to the challenge of infrastructural requirements and hoped the government would come in to aid the project.

Speaking at the same event, Hon. Malanji commended UCZ for its continued activeness in different sectors of human endeavours such as Agriculture, Education and Health Services which is a testimony that the church and the government are long outstanding partners in as far as development for the country is concerned. He then congratulated the church for transforming UCZ Theological College into a University which will stand to give Quality Education to a lot of Zambians.

Hon. Malanji cautioned members of the public to go through the right channels and gain well-deserved qualifications rather than to be obtained in unorthodox manner. He said, “Education is the equalizer that gives a fair chance for anyone to rise above one’s background situation and therefore deserves respect”.

“Government in its efforts to diversify the economy from copper to agriculture; however we need a well-trained workforce in order to achieve this.  Therefore am happy to learn that Chipembi Farm College has been turned into a faculty of Agriculture at the UCZ University as it has potential to be the bread basket of the University and the nation as a whole” he added.

He further added that the Registrar’s Office is a nerve-centre upon which the support of the governance and academic administration of the University evolves. “It is for this reason that I want to register my commitment to the growth and success of the UCZ University” he declared.

Rev. Dr Kangwa later emphasised the importance of Education before finally concluding his speech. “There can be no freedom without education. We need quality education in all sectors and facets of life, including the Church.”

Furthermore, the newly launched tree planting exercise was also a highlight of the event as the Minister and his wife along with other church workers and Synod officials took to the reserved area at the Church to plant some trees. Hon. Malanji was very pleased to learn that the Church not only shows interest in social services and religious matters but also contributes to positively towards environmental change. A total number of five trees were planted in Kitwe.

The induction service was well added by members of the public and notable church administrators from various congregations as well as important political figures based on the Copperbelt, not forgetting the marvellous singing groups that alighted the service with Melodies that attracted instant donations from Hon. Malanji throughout the service.