ZAMBEZI:   Chavuma consistory of the United Church of Zambia was among other many consistories that celebrated the countdown Golden jubilee celebrations on 29th June, 2014. This was hosted by All saints congregation in Zambezi with members drawn from Chitokoloki and Chavuma preaching points. Preparations started with a week of Bible study and prayers culminating into the actual celebration day.

About 300 members gathered on 29th June 2014 for the celebration. Among special invited guest were Mrs Muzungaile- the Guest of Honour from the Office of the President (standing in for District Commissioner who was committed with other duties).  Others included representatives from other churches like united Methodist Church and several church citizens who saw the birth of the United Church of Zambia in Zambezi.

The countdown celebration match past kicked off around 09:00hrs (from the council offices along Chavuma road up to the church building) led by the Boys’ brigade brass band and the Girls’ brigade, majorettes followed by the choir, WCF, MCF, the Minister – in – Charge Rev Donaldson Bwalya  and other church leaders. The whole procession was characterised by singing joyous songs and dances drawing almost everyone’s attention in the township. 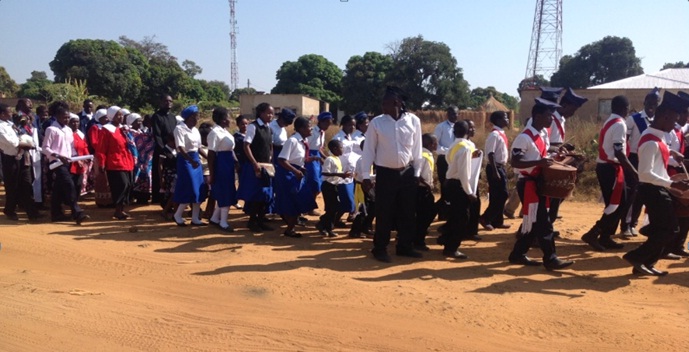 The majorettes and Boys Brigades in full swing.

The match past was later followed by a church service at around 10:00 hrs where the preaching, speeches, and church history were presented.

The church service was led sister Nancy from Chavuma. The local church history of the United Church of Zambia in Zambezi was presented by Mrs Maseka. The homily and a segment on general church history were presented by the minister Rev Bwalya. The service ended around 13hrs and lunch was served to everyone celebrant.