UCZ Congregations Celebrates 50 Years of the Gospel and Unity

MWANDI:In January 2015, the United Church of Zambia (UCZ) will celebrate its Golden Jubilee – 50 years of spreading the Good News – while strengthening the bond of unity, founded then. Other than preaching the gospel, the UCZ is deeply involved in the work of social ministry, concerned with the physical, social and spiritual well-being of all Zambians.

On Sunday 29 June Mwandi Consistory launched its Golden Jubilee Celebrations. This event commenced at 09:00hrs with about 200 congregants assembling at Mwandi MTN for a march through the village to the service held outside the Church. Among the dignitaries were His Royal Highness Senior Chief Inyambo Yeta and his wife Lunga. 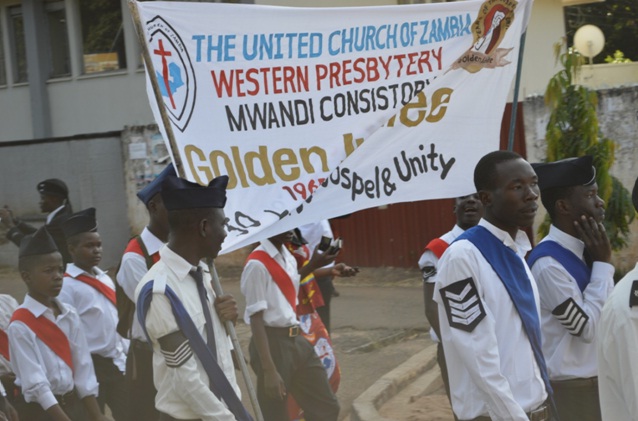 Also in attendance was the District Commissioner Mrs Afuna Chali – the Guest of Honour.  The Boys Brigade Drums led the procession with the Consistory’s Golden Jubilee Banner, the marchers comprised of Church workers, the Boys and Girls Brigade and Sunday School at the head followed by the 5 Sections or Wards that make up Mwandi Congregation, each displaying at their head their own printed banners.

On arrival at the Church, march participants were welcomed by those who had not marched and were awaiting the crowd’s arrival including His Royal Highness Senior Chief Inyambo Yeta. The Service began with the setting down of the banner, the lighting of a candle and the entry of the Bible. Then all congregants stood for the National Anthem.

The Call to Worship was from Psalm 133 and 134.This was followed by the Hymn of Praise Lwakulumbeka Mulena (We praise you, Lord). The Worship was led by Deaconness Josephine Kabamba.

The homily was delivered by Rev Wezi M Manda on the liberation. The United Church of Zambia and the Zambian Republic are in the celebratory mood as both shall be celebrating their 50th anniversary next year January and this year respectively. While Zambia now enjoys political freedom, there is still much to be done regarding the nation’s economic, social and spiritual bondage.

The Guest of honour Mrs Afuna Chali thanked the UCZ for working in partnership with the Government in the fields of health, education and social services nation-wide, and mentioning in particular Mwandi Mission Hospital, the UCZ Mwandi Primary and Secondary Schools, the OVC programme and Kandiana, the home for Aged. 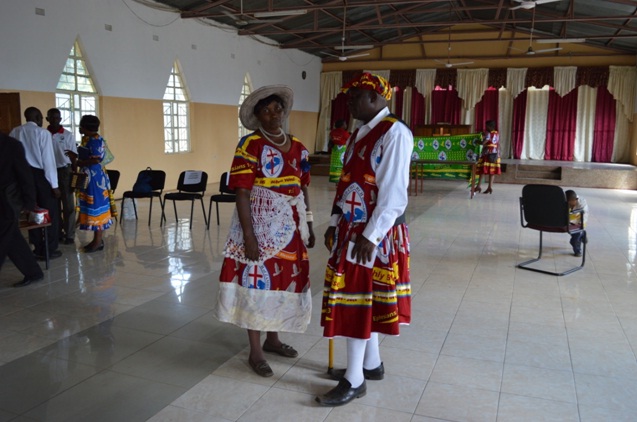 The Congregation joined in reciting the Golden Jubilee Pledge of continued unity. The service ended with Hymn 82 La kacenu, ha u sa bulukiwe (Today, as you have still been spared) followed by a celebratory lunch by all. The local UCZ Golden Jubilee celebrations marked the beginning of the countdown celebrations leading to the main one in January 2015. It was the prayer of all those that participanted in the celebrations that the church realises its position in the body of Christ; and continues to look out as part  of the worldwide church and embracing Christ’s wish that all may be one (John 17:21) attested by the  “50 Years of the Gospel and Unity”.

By our reporter Rev Wezi M.Manda.