LUSAKA: The Council of Churches in Zambia (CCZ) held the Church leaders Symposium on 5th September 2014 at Kapingila Guest House from 08:00 hours to 13:00 hours under the theme : “Commemorating Jubilee: Biblical, Theological and Social reflection”. The discussants gathered to discuss the concept of “JUBILEE” from a Christian perspective. 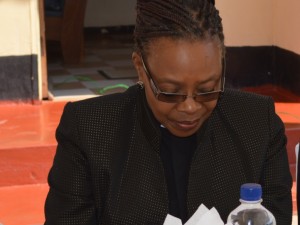 In attendance were Rev Dr Alfred Kalembo, the CCZ President, Rev Susanne Matale, the CCZ General Secretary, Rev Dr Edwin Zulu, Chair for the CCZ Theological Committee, Rev Harris Silishebo Silishebo, the CCZ University of Zambia Chaplain, Rev Jane Nyirongo Moderator for the Uniting Presbyterian Church in Zambia and many others. Also in attendance was the United Church of Zambia (UCZ) represented by Rev Lackson Chibuye, Rev Bornwell Kazovu, Rev Mwaka Kamwambi and the Synod Communication Secretary Rev Dennis Mbita Sikazwe. The UCZ who will be celebrating their Golden Jubilee next year on 16th January 2015, and were.

Some of the topics covered were: Background to the Jubilee: What is Jubilee?; Understanding and interpretation of Jubilee from the Biblical perspective (Old Testament and New Testament);  understanding and interpretation of the Jubilee from the social and political perspective. After these presentations, there were plenary sessions in which participants had moments of reflection focusing on the 50th Century Jubilee Celebrations inferring what this could mean for the Church, the Government, Society and individuals.

During the plenary sessions fears were expressed that the country (Zambia) may go to the day of independence without a new constitution. It was reiterated that the government should not dictate the constitution process, or who should be included or excluded in the review. It was further argued that the Parliament in Zambia does not pass a constitution but it can only pass the Act. The Jubilee celebrations should have linkages with the declaration of Zambia as a Christian nation. It should also address land, poverty and ecological issues. Zambianisation should not overlook professionalism and qualifications. There was need to have prayers a day before the Independence Day, and that the government should teach its citizens the value of land ownership.

Participants bemoaned the poverty levels in Africa, and Zambia in particular. It was observed that an African lives on less than a dollar, while a cow in Europe lives on more than 10 Dollars. It was therefore argued that it was better to be a cow in Europe than being a human being in Africa. It was brought to light that CCZ was going to launch a book on “Jubilee”.